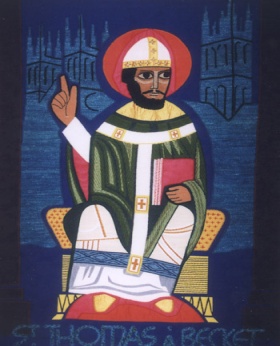 Thomas Becket was born in around 1120, the son of a prosperous London merchant. He was well educated and quickly became an agent to Theobald, Archbishop of Canterbury, who sent him on several missions to Rome. Becket's talents were noticed by Henry II, who made him his chancellor and the two became close friends. When Theobald died in 1161, Henry made Becket archbishop however; Becket loyalties were with the church. He often disagreed with the king fought for what he thought was right. On the 29th December 1170, four knights, believing the king wanted Becket out of the way, confronted and murdered Becket in Canterbury Cathedral.
Becket was made a saint in 1173 and his shrine in Canterbury Cathedral became an important focus for pilgrimages. Thomas Becket had the courage to lay down his life to defend the Church against an aggressive state. Many miracles were reported at his tomb.

St. Thomas of Canterbury (Thomas Becket), the patron saint of our school celebrates his feast day on 29th  December. However, as the school is closed for the Christmas holidays, the governors choose a date (depending on when the school re-opens) as close as possible to the original feast day for our celebrations. The governing body would like the children to identify with the patron saint of the school so every year they allocate a sum of money to be spent on certain activities for the pupils to celebrate the feast of their saint.